Carissa Baird
Fracking, #whaling, manatees, warships, and narwhals all in this episode of the Weekly Dive! Fracking off California Coast?: A lot of people have been  up in arms lately in response to the purported plans to “frack”, formally called “hydraulic fracturing”, off the coast of California — a drilling practice that could not only devastate the ocean, but our local drinking water as well. There was a very compelling article in the HuffPost a couple months ago pertaining to ocean fracking, but there have been more and more reports on it since it is still being debated upon. Why they are debating we don’t know, to us the solution is simple – just don’t do it! Problem solved. As of now, it’s simply been postponed.

#Whaling: On a more light-hearted note, there is a new trend taking Vine by storm called “Whaling”. No, it’s not the harmful kind; this is more of an homage to our cetacean friends that involves a backward bending motion, preferably behind an object, intended to imitate breaching whales in the ocean. While it is one of the more weird pieces of news we’ve seen go viral, we have to admit it’s pretty hilarious!

Miami Manatees in Potential Peril: Developers on the Orange State coast have shaken things up amongst their manatee loving community with talks of building more boat slips in the Miami River, simultaneously lightening the restrictions already in place by Florida’s manatee protection plan. The slips would increase more boat traffic, increasing the risk of manatee/water craft collisions, which might result in manatee deaths. Wait, they do know manatees are an endangered species, right???

Warship Stops for Whale Crossing: In a more respectful display of action for ocean life, a U.S. Navy warship off the coast of Dana Point, CA made headlines for stopping the ship at a whale crossing! A pod of grey whales moving through the water crossed their path, and the ship was nice enough (read: smart enough) to let them pass. We think that in contrast to black cats, whales crossing your path are actually a sign of good luck.

Blue Marlin Attacks BP: In “karma news” we have a disgruntled Atlantic blue marlin going postal on a BP oil rig off the Angolan coast, costing the company an estimated $100 million. Enough said.

Narwhals May Have Very Sentitive Teeth: Scientists have long studied the “unicorn of the ocean” – the narwhal –  in efforts  to come up with a reasonable explanation for that ginormous tusk sticking out of their mouths. Aside from them being just pure magic, the latest theory is that the long tooth serves as a sensory organ, allowing the narwhal to assess changes and salinity in seawater and locate a mate. Basically, narwhals just have really sensitive teeth . . .  only in this case, a trip to the dentist isn’t necessary.

Into the Mouths of Giants 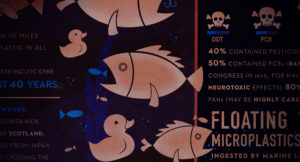 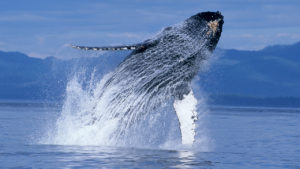